Where community and environmental literacy come together:
Relax. Sit down. Enjoy. Connect.

What is an Ox?

I attended the Utah State Fair this past weekend. I love going to the fair to see the pigs, sheep, all of the beautiful vegetables, and even the butter sculpture. I think this year, however, the best part of the fair was by far the giant steer. This cow weighed over 3,000 pounds, stood 5'5" at the shoulder (taller than me!) and can only be described in my mind as a giant, brown elephant cow. The informational sign that hung above this big guy alluded to oxen being regular steers that are trained to work. I got to thinking about this and it begs the question, "so what, exactly, is an ox?"

Essentially, Oxen are mature, castrated males belonging to the domestic cattle family that are trained to work. Sometimes these beasts are also used for meat at the end of their lives. A steer, by contrast, is also a castrated male, but is a younger animal that may not be trained, or may not be strong and mature enough for hard work. In the United States a steer is not considered an ox until it is four years old, by which time it is considered large enough and mature enough for any work required of it. If a steer is taught to work before it is four years old, it is called a "working steer." 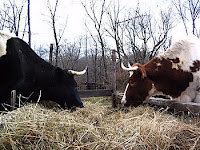 Female cattle can also be oxen, but they are generally used more for producing milk and more calves. Steers are often larger and can pull more weight than female cattle. Oxen are generally bigger than most cattle. This is due to the fact that most steers are slaughtered before they reach maturity and their full size, while oxen are live for much longer. This is interesting since steers/cattle are not even considered oxen until reach their full size and maturity at four years.

Oxen also have very large horns compared to many steers. This is also due to the age and maturity of steers vs. oxen - Their horns grow as their bodies grow. Their horns are also useful when working. When people are choosing oxen to use, they look for cattle with horns as their horns keep the yokes on their heads when they back up. Any breed of cattle can be trained as an oxen, but some breeds are better than others and training can take longer depending on temperament and other factors.

I have limited cattle experience. Growing up, one of my best friend's grandfather had a ranch on the Utah Arizona border and I often went down with her family to help them heard the cattle in the spring and fall. Other than that, my only experience with oxen is on the "Oregon Trail" computer game that was all the rage in elementary school. Who knew that they were essentially the same animal?